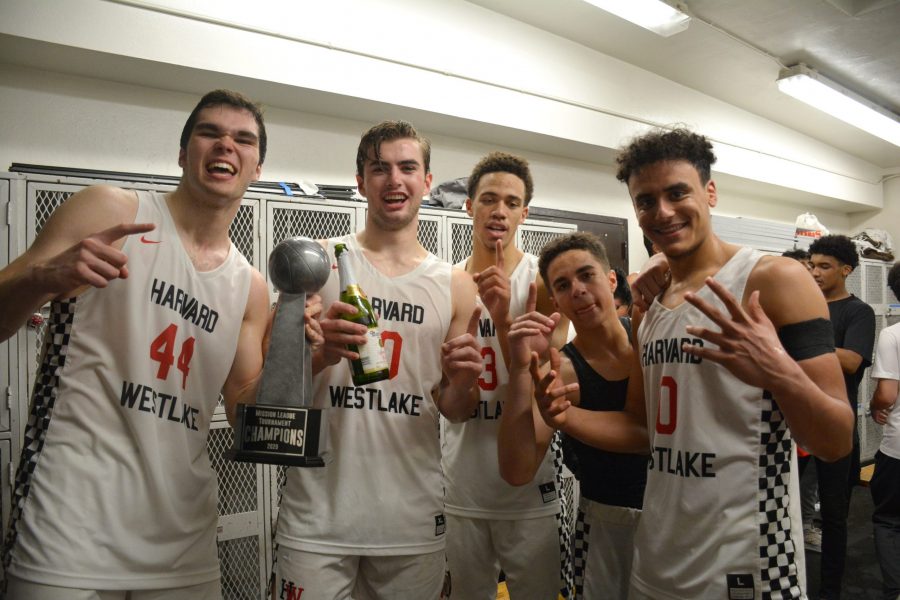 The Boys’ Basketball team won its second consecutive Mission League Championship last night, defeating Chaminade College Preparatory 81-66. The Wolverines got off to a hot start, beginning the game on a 9-0 run, a lead they would never relinquish.

Brase Dottin’s 19 leads the Wolverine to the Mission League Championship! Hooks had 16, Thrower with 15 pic.twitter.com/10u3gzqqtK

The Wolverines were led by shooting guard Brase Dottin ’20, who put up 19 points in the victory. In addition, power forward Trumann Gettings ’21 and center Mason Hooks ’20 each scored 16, and point guard Cameron Thrower ’22 had 15.

And-one from hooks makes it 50-35 pic.twitter.com/JgXDRtH8xl

The win qualifies the Wolverine’s for the Southern Section Open Division Playoffs for the first time in program history. Yelling over the sounds of cheers in a raucous, post-victory locker room, Gettings said he feels the team is now even closer to its final goal.

“It’s a great feeling,” Gettings said. “Since I joined the team as a freshman, our goal was Open Division Championship, and just to have the opportunity to play against these great teams.”

With the playoffs coming up, Gettings said he is focused on enjoying the team’s victory, until the work starts again next week.

“I’m going to enjoy my weekend, then get back at it Monday to get ready,” Gettings said.

The playoff matchups will be released tomorrow, and the Wolverine’s first game will take place Tuesday, Feb. 11 at a location to be announced.