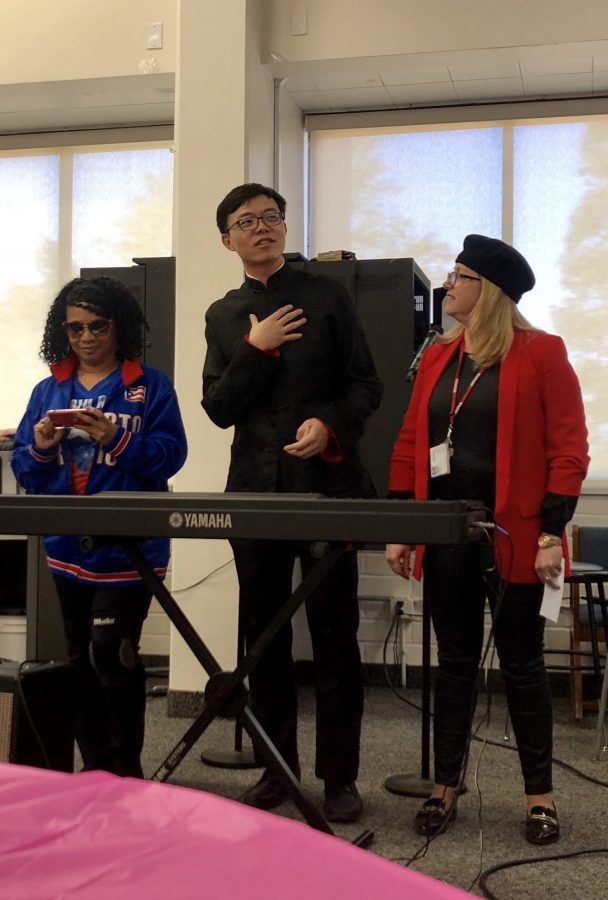 Chinese teacher Bin He, Spanish teacher Sephora Escarpeta-Garcia and French teacher Karine Bruno share a poem with the audience, switching off every stanza. The teachers recited the poem in the language that they teach. Credit: Quincey Dern/Chronicle

Students and teachers showcased their talents at the Valentine’s Day themed Coffeehouse in Chalmers East after school Monday.

Prefect Council hosted the event, where a variety of performances were held. The Coffeehouse opened with three teachers from the World Languages department who performed a collective poetry reading. Chinese teacher Bin He, Spanish teacher Sephora Escarpeta-Garcia, and French teacher Karine Bruno shared one poem together and switched who read every stanza. Each teacher spoke in the language that they teach, while a projector displayed the poem in English.

“It was a really cool concept, and I enjoyed that teachers could also share [a performance] at Coffeehouse and express themselves,” Rhea Madhogarhia ’22 said.

Musical acts included Ash Wright ’22 and Olivia Gubel ’21 who sang songs, as well as Alec Davila ’20, accompanied by Gabe Yaron ’22 on the guitar. Willa Fogelson ’22 also sang an original piece for the audience.

“I’ve never performed at Coffeehouse before; I was sad because I wanted to [last time] and couldn’t,” Fogelson said. “I just like performing for other people my age, especially because it’s the songs that I write. I think that this age of people can really relate the most to what I write. So, I like seeing other people [at Coffeehouse] who go to my school, and then everyone can hear.”

Prefect Council decorated the tables with pink and red table cloths, an assortment of candy, and paper hearts.

A student provides her final thoughts

“I think Coffeehouse is a great way for students to showcase their talents and for other students to support them,” Senior Prefect Dahlia Low said. “I think that it’s a really supportive event where everyone kind of comes together to celebrate one another and to find inspiration in each other’s talents”.