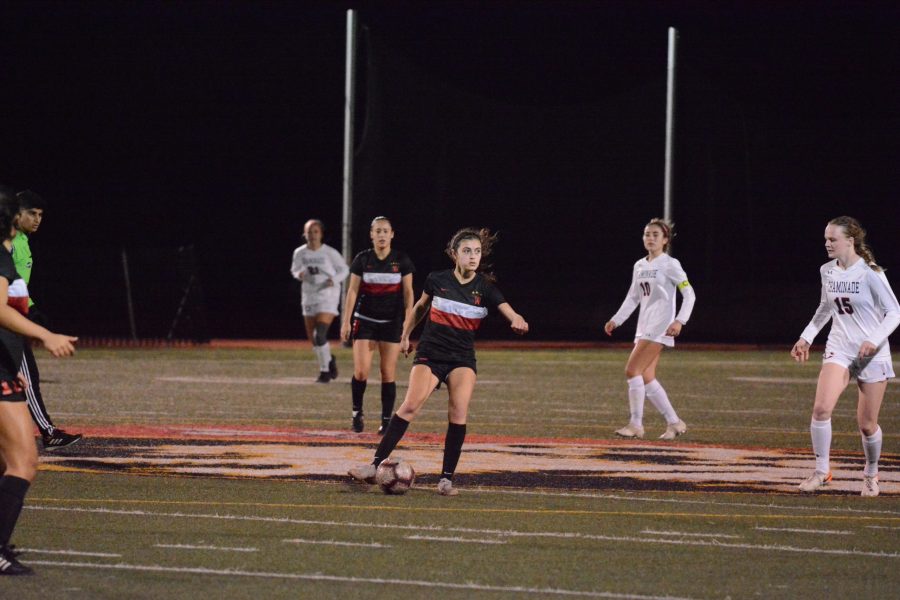 AMAZING ARIANA: Midfielder Ariana Azarbal ’22 looks for open teamates in the backline in a 3-1 win against Chaminade College Preparatory on Jan. 17. The Wolverines were eventually crowned league champions and reached the quarterfinals of CIF-SS playoffs. Credit: Justin Goldstein /Chronicle

After making the CIF Division I playoffs, the girls’ soccer team reached the quarterfinals against Upland High School, where the team lost 2-1 in overtime.

The squad finished with an overall record of 15-3-3 and a league record of 7-1. Throughout the year, the girls showed dominance on both sides of the field, which carried over into the first two rounds of playoffs, Forward Sophia Haynes ’22 said.

In the game against the Highlanders, defender Ella Watkins ’22 scored in the first half, followed by an Upland goal that forced the game to go into overtime. The Wolverines’ defense conceded the winning goal, ending the squad’s playoff run. Forward Haynes said the quarterfinal loss was due to an intimidating environment and unfavorable calls from referees.

“Upland High School had the biggest crowd we have had all year and a lot of people were heckling and they had a public announcer talking after every play which got annoying,” Haynes said.

Despite this loss, Girls’ Soccer Program Head Richard Simms said that the team performed well against a tough opposing crowd.

“I thought we did an amazing job of controlling the tempo of the game by keeping possession and frustrating [Upland High School] ,” Simms said. “We kept the crowd out of the game for long periods, though there were certainly times when they got the adrenaline pumping. Overall, we handled exceptionally well.”

Recounting its previous wins, the team beat Sunny Hills High School in the first round of playoffs 2-0 Feb. 13 at Ted Slavin Field. The Wolverines stuck first with a goal from forward Daniela Quintero ’22, and Brooke Stanford ’21 subsequently scored as well. Haynes said that Sunny Hills’s unique playing style proved challenging for the Wolverines.

“We knew that Sunny Hills was man-marking all of us, which was something we didn’t come across during the season, so adapting to that was a little bit of a challenge but once we got it we were able to overcome and take over the game,” Haynes said.

In the second round of the CIF Playoffs, the team beat Corona Centennial High School 4-0, with goals from Quintero, midfielder Natalie Barnouw ’21 and Haynes. Watkins said that the team’s commitment to its game plan was a big reason for success.

“Our team is made up of such talented girls, all with such great athleticism and technical skill,” Watkins said. “During the Corona game we had to remember to stick to our game plan and play the same way we have been for the past three months.”

Simms said that if the season could be summarized in one word, it would be gratifying.

“We had a fantastic group of players who treated each other with respect and worked their hardest,” Simms said. “The group just had a flawless and selfless attitude. I’m very proud of the people that they are.”

Quintero said the impact of the loss was not as great as that of previous playoff runs, due to the lack of senior players.

“I don’t feel like the loss was as sad as we don’t have any seniors, and it was more of a feeling of more upset than sad because we played so hard and we had good chances,” Quintero said. “We are going to continue to pass because we are more technical and faster and we are going to keep working hard for next season.”

Next season, the team hopes to continue what it started, Simms said.

“We intend to finish what we started this year,” Simms said. “We believe we can go all the way.”