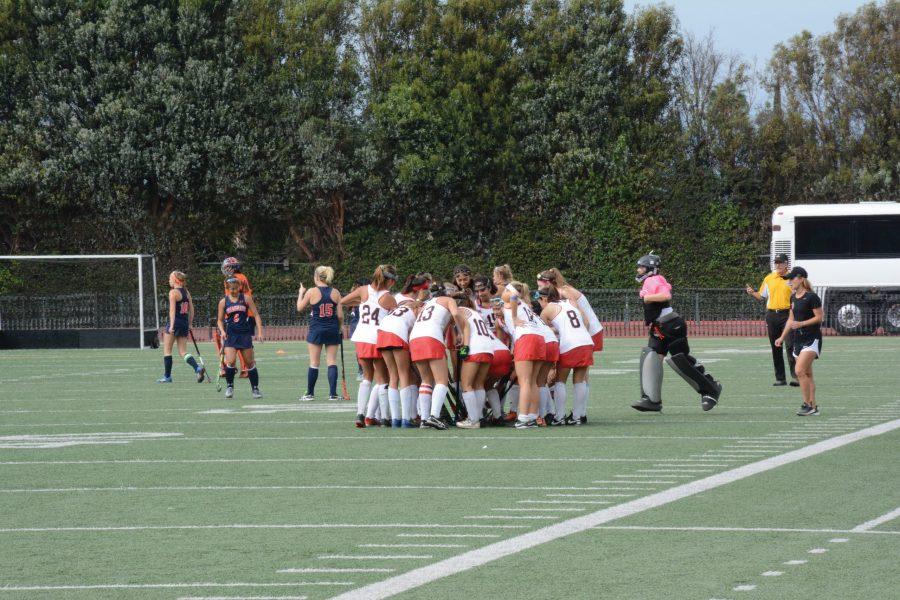 As the buzzer went off on the ‘smurf turf’ at Chaminade College Preparatory, the Wolverines found themselves in unfamiliar territory; the score was tied 1-1. After almost three undefeated seasons of shutouts and blowouts, the team had one last chance to preserve its 57-game win streak with a short corner.

On the first attempt, the short corner hit the foot of a Chaminade player, giving the Wolverines another chance. Captain and midfielder Rachel Brown ’20 said that the Wolverines knew the stakes, and they wouldn’t settle for a tie.

“On our second try, it came to me and then it went to [Bella Ganocy ’22] and she scored,” Brown said. “We were overjoyed and ecstatic. It’s a great feeling when you work well under pressure no matter who you’re facing.”

While winning a LAFHA Championship is a difficult task on its own, the team’s ability to win three is a testament to the unprecedented success that led to the Chronicle naming it this year’s Female Team of the Year.

Middleback Sarina Smolev ’22 said that this year’s performance came from a culmination of teamwork and hard work.

“Everyone put in so much effort and worked together, and that’s why I think we’ve had so many wins,” Smolev said. “Our team is definitely a family and

we all have a great relationship together on the field and off the field. Everyone is always there for each other and wants each person to improve and be the best player they can be.”

Smolev said that this year’s senior leadership fostered an environment for success.

“[Brown], [Astor Wu ’20] and [Sam Yeh ’20] were amazing leaders to our team and really led us to success by keeping us focused and always encouraging us to do our best,” Smolev said. “We will miss them a lot, and it definitely will be difficult without them next year but I think our team is still very strong and capable of continuing our success.”

The team’s success was also spurred on by the coaches, Brown said.

“It’s really easy to be calm, but the coaches motivated us through the entire year, and we were working and training hard even through the beginning of the season,” Brown said.

In the future, Brown said she expects the team’s rising juniors to step up as leaders, similar to what has happened in previous years.

“I know the juniors who will become seniors and I trust them with my life and the success of the program,” Brown said. “The juniors are all hard-working and they have [Fiene Oerlemans ’22], [Sara Maniscalco ’21], [Ella Ganocy ’22] and [Bella Ganocy]. There’s a whole list of them, and I’m excited to see their games.”