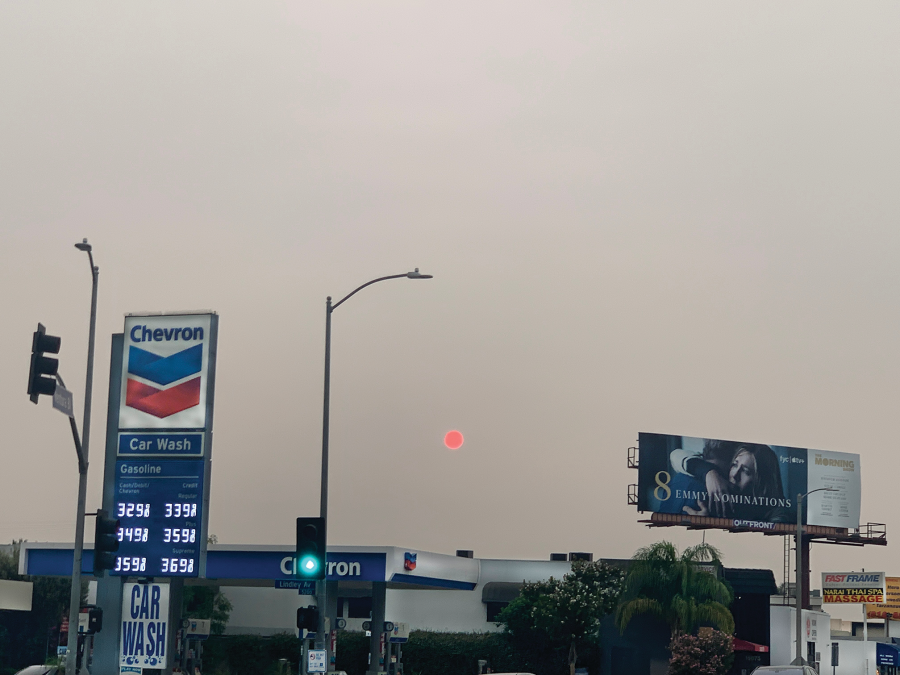 Smoke produced by several wildfires on the Pacific Coast casts a shadow around the sun in Los Angeles. The fires, most of which started burning in late August, are record-breaking, as they killed over 30 people and burned millions of acres from Oregon to Southern California. Credit: Konnie Duan/Chronicle

Audrey Perkins ’23 watched as a plume of smoke rose out of the Bobcat Fire while at a friend’s house in Pasadena. Before long, a layer of gray smoke blanketed the sky, obscuring the Californian sunshine and the white clouds.

“I live in Silver Lake, which is closer [to the fire] than a lot of people at Harvard-Westlake live. I know everyone saw a lot of smoke, but the sky was bright orange for a few days,” Perkins said. “For a really long time, even after [the smoke] cleared up, there was still ash all over everything. I didn’t have to evacuate, but I saw a lot of people in my classes who had to go to a grandparent’s house, a friend’s house or stay in a hotel. It was really scary.”

Rising temperatures contributed to the severity of the fires, as this past August was the hottest on record in California, according to University of California, Los Angeles climatologist Daniel Swain. Climate change also compounds the intensity of the fire by creating warmer and drier conditions, making the region more susceptible to wildfire, NBC News reported. Not only do these conditions increase the likelihood of fires, but they also end up fueling them, increasing their intensity and destruction. From 2009 to 2018, fire dollar loss in the United States increased by 90.6%, or approximately $10.9 billion, and the number of deaths from fires has risen by 20.5%, according to the U.S. Fire Administration.

In Los Angeles, air pollution from the fires caused especially poor air quality in recent weeks. Over Labor Day weekend, L.A. residents experienced the worst air quality since 2003, with ozone present in the air at 185 parts per billion Sept. 6, according to the Los Angeles Times. The smoke blocked out the sun and cast an eerie glow over much of the state. Smoke from the wildfires was seen as far away as Britain on Sept. 9 and Iceland on Sept. 16, Reuters reported.

As a result of the poor air quality, the school canceled athletic activities from Sept. 10 to 15.

“Each day, athletic administration consulted with the Director of Sports Medicine [Brian Gallagher] and Community Health Officer [Milo Sini] to evaluate the air quality at both the middle school and upper school campuses,” Head of Athletics Terry Barnum said in an email. “By [1 p.m.] each day, we made a decision [about] whether it was safe enough to move forward with practices or cancel for the day.”