Feature: Politics On The Brain 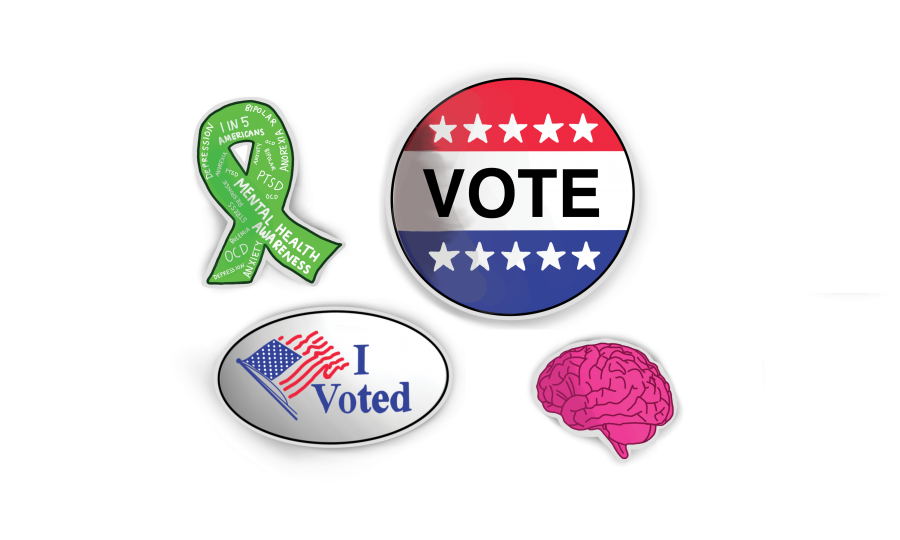 When Head Prefect Jonathan Cosgrove ’21, who had been pre-registered to vote for months, turned 18, he frantically reloaded his web browser to confirm his registration. Cosgrove had one thing on his mind: voting in the 2020 presidential election.

“I am so excited I can finally vote,” Cosgrove said. “I’ve always tracked politics closely, so being able to exercise my democratic right and have an impact on the course of the United States is something really special.”

To Cosgrove, an aspiring politician, becoming a first-time voter symbolizes more than a right of passage in his civic engagement.

“There are so many [issues] on the ballot this year that go beyond the individual president,” Cosgrove said. “There are issues of race, COVID-19, the Supreme Court and more that directly affect the lives of millions of Americans— even more so than other elections. In that sense, my vote is more meaningful to me and my community this year.”

After the 2016 election, stress, anxiety and a sense of helplessness amplified in Americans, according to the Washington Post. The New York Times also revealed that 55% of Democrats and 59% of Republicans felt the election was a major source of stress for them. With the next presidential election less than a month away, many fears are on voters’ minds, including voter suppression in the form of manipulation of mail-in ballots, voter intimidation at the polls, the direction of the Supreme Court, global warming, the management of COVID-19 and a potential post-pandemic recession. Out of the 172 students who responded to a Chronicle poll, 135 answered that the current political climate has affected their stress levels. Of the 156 students who shared their political party, 117 identify as Democrats, 10 identify as Republicans and 29 affiliate themselves with other political ideologies.

Over the course of President Trump’s term, he has withdrawn from the Paris climate agreement, supported anti-immigration policies including the Trump wall and the Middle East immigration ban and reluctantly condemned white supremacy. The actions of the Trump administration have impacted people differently. Upper School English teacher Jocelyn Medawar said she avoids watching the nightly news for her mental well-being.

“I think the last few years have been incredibly stressful, personally, [and] anxiety-producing,” Medawar said. “I try not to watch the news at night now. That was never the case before. It’s hard to see the whole idea of civil discourse fall spectacularly apart in a participatory democracy.”

Members of the school community viewed the first Presidential Debate of 2020, which Medawar called a debacle. Thomas Schramm ’20 who has participated in Youth Government said he felt the debate was demoralizing.

“I thought it was really disheartening,” Schramm said. “The debate had little to no major policy content, and I felt like the whole show just devolved into personal attacks. What I really found to be disturbing were the attacks on Biden’s son Hunter, along with Trump’s jabs at Biden’s intelligence. Trump had absolutely no respect for his opponent, nor was he willing to take the time to listen to Biden at all.”

Fox News anchor Chris Wallace, who moderated the debate, said the event was a missed opportunity for the United States and that he felt saddened by how it played out, according to The New York Times. Schramm said that despite a disappointing first debate, he remains optimistic.

“I’m hopeful that [in] future debates—though with Trump getting corona, I doubt they are still going to happen—the two candidates [will] engage in an actual conversation, not just personal attacks,” Schramm said. “I am a big fan of Biden, so I hope he can step up his game in the next debate.”

Audrey Perkins ’23, who also viewed the debate, said Trump’s behavior during the event further underscored the importance of voting him out of office.

“Politics right now is a mess,” Perkins said. “The way Trump behaved during the debate was unpresidential. He refused to condemn white supremacy and, instead of talking about his policies, decided to make low blows at Biden’s sons. I think the debate really showed how important it is for everyone to vote if they can.”

Chad Bacon ’22 said he felt disappointed by the debate and the behaviors of both Trump and Biden.

“The immaturity displayed by not just President Trump, but also Joe Biden really frustrated me,” Bacon said. “I know it is difficult [to remain calm], but I expected [the former] Vice President to be able to keep his cool and not stoop down to the games Trump was playing.”

Bacon said his mental health has also been impacted negatively by current politics. Despite this, he said he has persisted by staying tuned in to the world around him.

“The current political climate definitely has provided me moments of frustration and sadness,” Bacon said. “But overall, ever since [then], I started to educate myself [on current politics] for multiple hours daily, which began about nine months ago.”

The increased political awareness can directly correlate with an increase in stress and relationship disturbances, according to a study conducted by The Wall Street Journal in 2019. As the election is less than a month away, Perkins said her worries for its outcome are increasing, and she fears what a second Trump term could look like.

“[The election] is adding some stress on top of everything, but the most I can do is be hopeful for the future,” Perkins said. “As the election gets closer I am starting to worry more and more, but overall I am doing okay.”

Although youth have become more aware of political and social issues in recent decades, younger citizens are statistically less likely to exercise their right to vote, according to a data accumulation from an analysis by the Pew Research Center prior to the 2016 presidential election. Perkins said that despite her feelings of frustration with the current political climate, she feels energized to take action.

“I have been helping get young people registered to vote,” Perkins said. “With how polarized the election is this year and what’s at stake, it’s really important that everyone who is able to vote does. Our generation has a very low voter turnout, and we shouldn’t be leaving the election in the hands of Gen X or the Baby Boomers since it is our futures that are at stake.”

Schramm is also encouraging people to vote, though not out of the same worry as Perkins.

Like Perkins and Schramm, Medawar is also taking action by enhancing her knowledge of ongoing social justice campaigns, such as the Black Lives Matter (BLM) movement.

“I’ve been educating myself about African American history, [which] I was always keenly aware of but that I never really understood as well as I should,” Medawar said. “There are people out there in BLM and in other groups who are incredibly inspirational. I appreciate the public figures who know what it means to fight for something, as opposed to fighting just to hear their own voices.”

Politics aside, Medawar said she hopes her students will learn from meaningful examples of leadership to become well-rounded members of society.

“As my students know, I’ve been citing the late R.B.G. lately,” Medawar said. “‘Fight for the things that you care about, but do it in a way that will lead others to join you.’ If all the tools of their education boil down to that, I’ll be happy.”