There’s no us in team 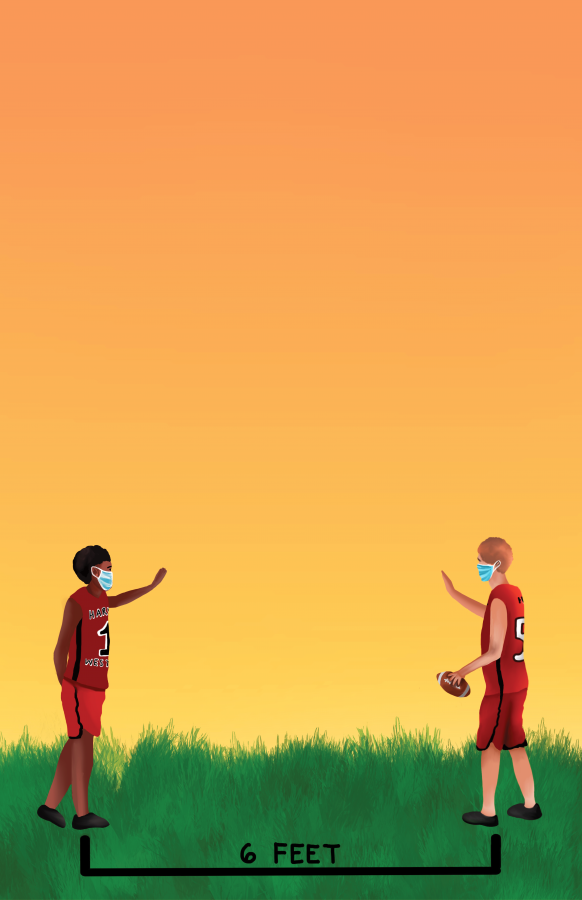 When point guard Melissa Zozulenko ’21 packed her bag on the last day of in-person school, she didn’t realize she would have to say goodbye to her basketball team for over six months. Since then, she has been isolated from the majority of her teammates and coaches, even though she has recently returned to the court for her club team. In addition to missing her friends, whom she normally spent hours with every day, she couldn’t release herstress through basketball practice.

“I was really used to seeing them everyday and having basketball be an outlet, so it was inevitably hard on me at first, but keeping in contact with them whenever we can has helped mutually,” Zozulenko said.

Even though sports have partially resumed on campus, many students have not been able to come to practices because of concerns about COVID-19. Without traditional practices, teams are missing out on the small yet vital daily interactions that allow players to bond. Subsequently, players said team morale and their mental health have been negatively impacted.

Field hockey player Iris Huang ’21 hasn’t been going to practice out of caution and has missed the daily interactions with her teammates.

“I think it hasn’t affected me too negatively, but there’s definitely an aspect of missing the support I get just by being with them every day and the comfort of knowing that they’re there for me,” Huang said.

Even though sports have partially resumed on campus, COVID-19 cancellations of sports trips and traditions have made it difficult for players to bond as a team. The girls field hockey team missed out on their annual trip to Florida this Summer, but Huang said team bonds were not affect-ed, as no new players were added to the roster.

“I think not going to Florida hasn’t affected us much this year since no one new has been brought up because there hasn’t been able to be tryouts, so we all already know each other well,” Huang said. “We’re all good friends on and off the field so it wasn’t much of a big deal.”

Despite field hockey player Sarina Smolev ’22 returning to the field with her team on the upper school campus, many of her other teammates haven’t gone to practice. She said this absence makes team bonding very difficult and ultimately affects the team’s performance.

“A lot of the team hasn’t come to practice, so we haven’t been able to bond and practice as a full team,” Smolev said. “It’s also been a challenge playing again after having our training season and summer practicescanceled.”

Football and basketball player Jack Weisskopf ’21 said he has found it hard to be seperated from his teammates, especially since it is his senior year season.

“Not being around my teammates and coaches has definitely been tough because these people are my extended family and having all of this uncertainty around my senior year of athletics has been hard,” Weisskopf said.

Even though COVID-19 has restricted team bonding, the majority of players have already spent at least a year playing with and getting to know their team. However, this is not the case for the freshman class, and many said it has been especially difficult for them to adjust to a new team in such a volatile environment.

Jasmine Tang ’24 said she has struggled to get to know her new teammates due to the limitations of practicing during the pandemic.

“It is more difficult to connect with the rest of my team, but having practices together helps a lot,” Tang said. “We get to see each other almost every day, but it’s much different than seeing each other when we walk around campus. It’s nice, but all the precautions make it less natural.”

Players said that getting back into the swing of practice has brought hardships due to this lack of community. Weisskopf admits that there have been obvious challenges to teamwork.

“I would say that the lack of time that we have spent together obviously has affected our ability to collaborate with each other and also get to know the newer players on our team, but I think both basketball and football have done a great job in keeping the team camaraderie very high,” Weisskopf said.

Weisskopf, however, said he remains hopeful that team chemistry will improve quickly when a sense of normalcy returns. He said that the strong bonds the football team built prior to the pandemic will help them succeed in these times.

“I think this may only affect our season in its earlier stages, as it may take some time for us to get back in the swing of things when our sportsreturn to, ‘normal,’” Weisskopf said. “However, I think our strong relationships with the coaches and players will make this transition period very smooth and quick.”

With over six months separated as a team, players who haven’t returned to in-person practices worry that this lack of morale could impact their seasons negatively. Zozulenko said she is dissapointed that she is unable to meet with her teammates and worries that the lack of physical togetherness will cause bumps down the road when her team practices resume on campus.

“Despite training on zoom together, I think we will have to work twice as hard in-person to regain the chemistry on the court we had previously,” Zozulenko said.

In the face of the struggles and uncertainties of the pandemic, manystudents said they are optimistic their seasons will turn out well. Weisskopf said he believes the athletics department has been supportive throughout the reopening process.

“The athletics department as a whole has done an amazing job throughout this COVID period in supporting the players and coaches and giving us the opportunity to return to campus and continue on with practices,” Weisskopf said.