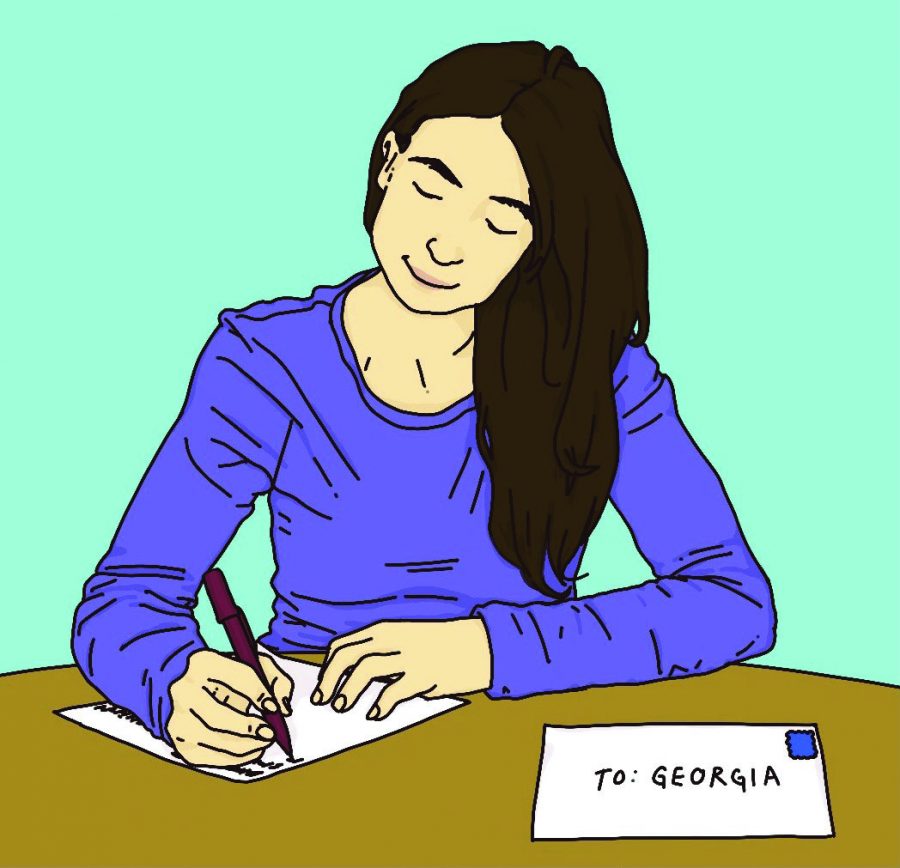 Students reached out to voters in Georgia encouraging them to vote in the upcoming Senate runoff elections Jan 5. Illustration credit: Sophia Evans

Members of the senior class are organizing fellow students to increase voter turnout in Georgia in time for the state’s Senate runoff. Allegra Saltzman ’21 is leading Instagram outreach to high school students in Georgia through the nonprofit organization When We All Vote, while Matthew Lee ’21 is spearheading a postcard-writing campaign through a civic engagement organization, The Civics Center.

Because neither candidate won over 50% of the vote in Georgia on Nov. 3, Democrat Raphael Warnock will run against Republican Senator Kelly Loeffler for former Republican Senator Johnny Isakson’s seat in a special election Jan. 5, according to CBS News. Georgia Governor Brian Kemp appointed Loeffler to fill Senator Isakson’s seat when Isakson retired at the end of 2019 due to health complications. Republican Senator David Perdue also faces a runoff election in January after failing to win more than 50% of the vote for his reelection in November. He is running against Jon Ossof, a Democrat.

Currently, Republicans fill 50 seats in the Senate, while Democrats have 48. If Warnock and Ossof both win their races, the Senate will be split evenly between the two parties. Democrat Vice President-elect Kamala Harris would have the tie-breaking vote.

Students share their experience reaching out to Georgia voters

Saltzman said the runoff elections in Georgia are unique because the political climate there is representative of the political polarization and diversity in the country as a whole.

“As we’ve seen, Georgia is kind of a microcosm of the entire United States because it’s politically divided and it’s a diverse state,” Saltzman said. “The races there, in some ways, are representative of the entire American [political] system and political divide, so making sure that there’s no voter suppression going on and that everyone has their voice [heard through] whichever way they want to vote is really important.”

Saltzman originally established a My School Votes team at the beginning of the school year to register young people to vote in the 2020 presidential election. My School Votes is a program led by When We All Vote, a nonpartisan non-profit organization that addresses race and age disparities in the voting public by increasing voter participation. The school’s team, made up of sophomores, juniors and seniors, is now transitioning to recruiting students in Georgia to various When We All Vote programs and encouraging voter registration for the Georgia runoff elections.

Lee is recruiting students to write postcards to high school students in Georgia asking them to register to vote as part of a nonpartisan initiative from The Civics Center. Lee also worked with The Civics Center to promote voter registration in Arizona by writing postcards before the general election and currently runs a political blog called On The Fence. Additionally, he volunteered for Vice President-elect Kamala Harris’s presidential campaign as a junior.

Lee said he is passionate about politics and civic engagement and believes it is important for students to actively participate in the political process.

“I think it’s really important for, especially people our age, to become aware of what’s going on in the world and know how to use their voice to create change because it affects our lives and it affects others’ lives,” Lee said.