Social Justice on the Shelf 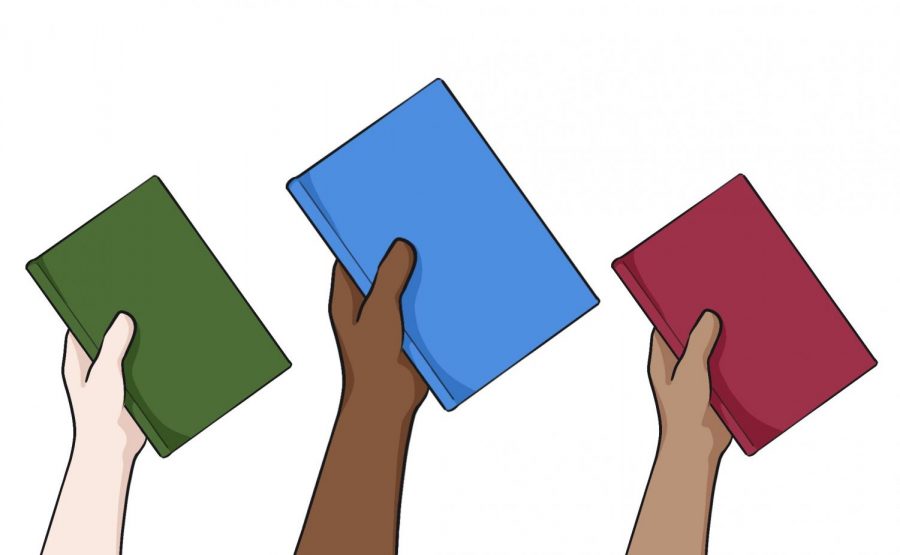 As Chandace Apacanis ’21 flipped through the pages of a riveting novel, it dawned on her what a major impact English literature has made on her high school education. By reading books of different genres, she said she has broadened her perspective of life and gained a better understanding of the human experience.

“Books make me aware of the problems that many people face, whether there is a rich white man that’s depressed, known as Gatsby, or the unsung struggles of minorities that I love to hear about but are drowned out by the Great Gatsbys of the world,” Apacanis said. “It allows me to be aware of problems that we all face as humans and specific problems that specific groups of people face and how it affects them.”

Books are sources of knowledge, serving as stimuli for inspiration and laying the ground for enriched discussions that raise awareness about diversity, equity and inclusivity. Christina Lee ’21 said that reading books helps her expand her understanding of the world.

“My own experience is limited, but through reading, I can see multiple different experiences and viewpoints,” Lee said. “Literature allows me to explore the range of human emotions and situations, but it also underscores some commonalities of people’s experiences, which I think are really interesting. Because, while a lot of the issues in these books are different, there is a common thread of human experiences, motives and situations [that] ties people together. I think in a lot of ways, reading teaches us to have a sort of compassion and understanding that grows from humanizing people we may never come into contact with or meet on a deeper level.”

Valerie Velasquez ’20 said that building empathy is the most powerful motivator to fight against discrimination and social inequality. She said books facilitate that first step beyond just recognizing that there is a problem to understanding how real people are really affected.

“I think books are an amazing way to build one’s empathy,” Velasquez said. “It’s easy for people to sympathize with others, but I think empathy is more of a learned skill that you have to constantly be working on. It can be difficult or near impossible to empathize with people who don’t look like you or have similar experiences to you if you never hear their stories or voices. Books allow you to access those experiences in a pretty intimate way considering that when we read we’re literally reciting someone else’s thoughts in our own mind.”

Some of the best literary works that preceded and followed the civil rights movement referenced the streams of underlying marginalization, racial discrimination and social injustice that have plagued our society for hundreds of years, Mohona Ganguly ’21 said.

“I think that both books and their authors are essential in helping society to understand social issues,” Ganguly said. “For example, “To Kill a Mockingbird“  was very influential in causing a frank discussion about race in the 1960’s. However, I do believe that the author also holds immense social power when they wield the pen to write their books. Representation in literature can also have a large impact on society. Although “To Kill a Mockingbird” is one of my favorite books, I do acknowledge that some of the actions taken by the characters and the author can be seen as coming from a position of privilege, regardless of good intentions.”

In the spring of 2020, some students in Honors English III: American Studies read author Steph Cha ’03’s fiction book, “Your House Will Pay,” about the  aftermath of Latasha Harlins’s killing and the tensions that arose between the Black and Korean American communities. Cha said that fiction books can help readers understand stories in a different manner than reading the news or reading nonfiction.

“I think there was a study not that long ago that seemed to suggest that fiction readers are more empathetic on average than people who don’t read fiction, and I think that the power of fiction is that by crafting something that is entertaining in some way, that kind of connects you to a fictional world through people that you are forced to inhabit their points of view and therefore empathize with them,” Cha said. “I think fiction does have that power to put you in somebody else’s shoes for a while and force you to inhabit their humanity.”

Author Austin Channing Brown spoke to students virtually Jan. 25 about her book, “I’m Still Here: Black Dignity in a World Made for Whiteness,” which empowers youth to seek justice and honor their backgrounds, Khyra Stiner ’21 said.

“I think that my favorite part was hearing the experience of a successful Black woman who went through similar experiences as me both in life and in school,” Stiner said. “It was inspiring to hear Brown tell her story and to learn how she was able to make the most out of the situation, as well as to get advice from her.”

The English classroom may offer an opportunity for students to have a safe space for discussions pertaining to social injustice and related issues. Spencer Sherman ’21 said class discussions about books can shape or change any preconceived notions that people may have of riots and protests.

“Steph Cha helps us understand both sides of the [Los Angeles Riots of 1992],” Sherman said. “Again, it’s important to understand both sides of an argument in order to form your own opinion. I believe she did exceptionally well at conveying each character’s emotion which drove their respective points of view. She helped the readers realize that racism can’t be fixed overnight, but the fight against it is always better than the alternative.

Ganguly said conversations about books teach people not only essential lessons, but also about the perspectives of others through the vivid descriptions of characters.

“I think that a potentially helpful way to overcome societal issues such as racism is peaceful conversation,” Ganguly said. “The power of words is very underestimated, and being able to hear from people face-to-face can definitely help start a discussion, and eventually, a move in the right direction.”

Engaging in regular class discussions allows students to develop a strong voice to confront the issues that plague our society, Apacanis said.

“I think we have to talk about our problems as a community as well as speaking out about things that negatively affect minorities,” Apacanis said. “I feel our main problem is micro-aggressions and police brutality. So things like protests and telling people when they’re being insensitive is important. We have to let people know that we aren’t going to allow these things to keep happening, and we’re going to hold these offenders accountable.”