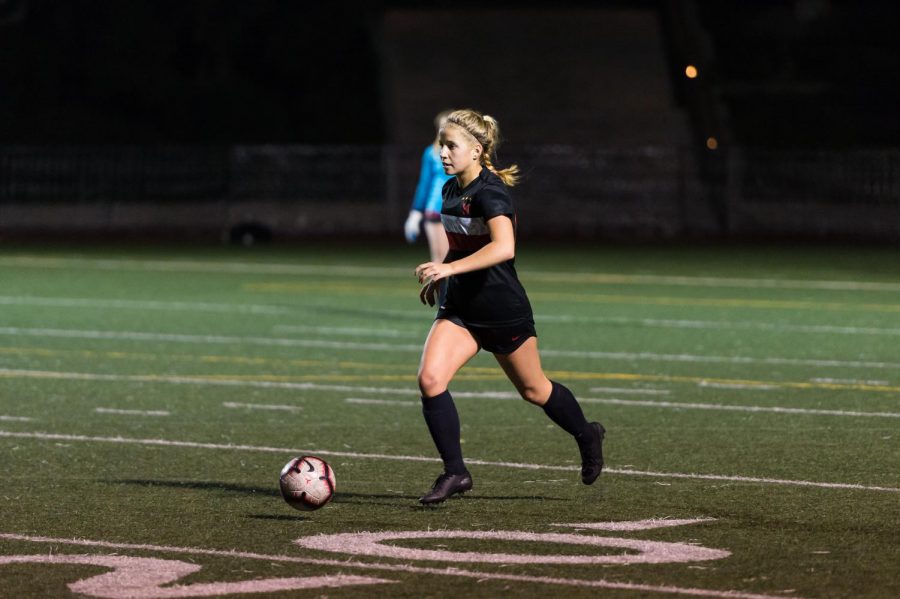 Defender Natalie Phillips ’21 looks to pass the ball to her teammate at a match last season against Hart High School.

The Wolverines’ offense proved unstoppable, scoring four goals in the first half and three in the third, while their strong defense allowed the Chaminade Eagles only one goal over the course of the match.

Defender Danielle Lynch ’23 said the team’s superior athleticism and skill were crucial to the victory.

“Our speed and our ability to keep possession of the ball were huge contributing factors to our win,” Lynch said. “I think being able to stay calm when the opponents were pressing us was also a game-changer, as we were able to keep control of the game.”

Lynch also said that the very first goal the Wolverines’ scored marked a turning point in the game.

“The moment when [it] was scored, the team’s energy and mindset was brought up, which led us to score the other three goals during the first half, allowing us to dominate throughout the rest of the game,” Lynch said.

Despite the team’s success thus far, Lynch said that it is very important that the squad maintains diligence and vigor as the season progresses.

“It felt great to come out with a 7-1 win against Chaminade, but we will definitely need to continue to stay focused throughout the year because we have a long season ahead of us,” Lynch said.

The squad will face Immaculate Heart High School for its third match in Mission League play on April 12.