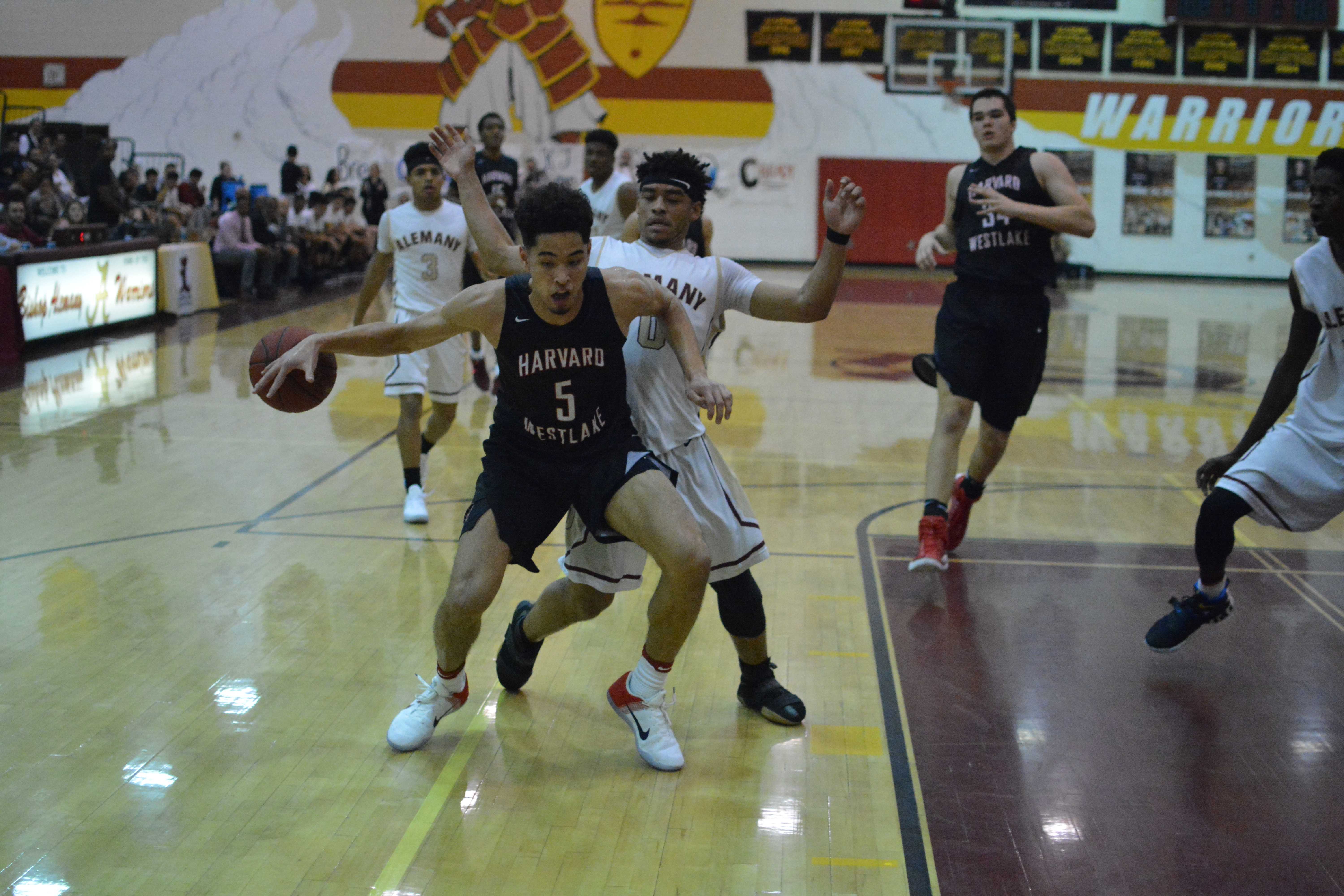 Guard Johnny Juzang '20 drives with the ball during the Wolverines loss to Alemany Nov. 9. Juzang finished the game with a team high 18 points. Credit: Aaron Park/Chronicle

NEXT MAN UP: JOHNNY JUZANG ALREADY DOES IT ALL ON THE COURT. AND HE'S ONLY A FRESHMAN.

JOHNNY JUZANG ’20 might as well be the Dak Prescott of the Harvard-Westlake basketball team.

Obviously, Juzang is not a quarterback, but when he’s on the court the Wolverine offense has a distinct organized flow to it akin to the mistake-free and efficient offense run by Prescott’s Dallas Cowboys. The impact that the 6’7” freshman guard has had on the team in his rookie year lies eerily parallel with that of Prescott’s.

He isn’t just an average rookie. Even with all of the talent surrounding him, Juzang stands out as a player who can stabilize the Wolverines on both ends of the court, yet gives them a chance to explode to new heights in Mission League play and beyond. Juzang calls himself a playmaker, but believes that his impact reaches far beyond putting the ball through the net.

“I’m a scorer and playmaker. Putting the ball in the hoop is what I do best, and my court vision and passing is something I’m good at as well. But I don’t like to label or box myself because I try to do everything and make an impact in all aspects of the game.”.

So far, he’s done just that. Juzang is averaging 15.7 points per game, which is second on the team to Cassius Stanley’s ’19 18.8. The lanky freshman is strong enough to bully his way into post ups, but especially thrives on midrange shots. His ability to score from all areas of the court gives the Wolverines lots of spacing as well; Juzang is one of five players on the team shooting at least 35 percent from behind the three-point line.

“He looks incredibly confident out there, and that’s huge for his development,” HWTV analyst Adam Rich ’17 said. “He’s a gifted playmaker with vision and really good shooting mechanics. He’s shot incredibly well from mid range, especially off the bounce.”

A simple eye test is enough to see that Juzang has had an immediate impact on the Wolverines. While he’s 6’7”, Juzang is not restricted to being a situational big man even though he is the tallest player on the court a lot of the time. Juzang doesn’t fit one specific mold. He’s one of the team’s best shooters, but if need be, the team’s leading rebounder can go crash the boards to give the Wolverines another possession. Even though he’s a freshman, Juzang has shown enough physicality and grit to be an impactful defender, yet has the poise and basketball IQ to wreak havoc on offense.

Juzang’s length and height as a point guard in combination with his post-game and athleticism put him in the mold of a young Shaun Livingston, the Golden State Warriors point guard, according to Rich. While Juzang is an efficient long-distance shooter, he thrives when he’s able to take advantage of mismatches in the post. If Stanley or Ali Iken ’17 starts getting hot, Juzang is a willing passer, but he is also adept to moving through screen to get an open shot and is good at making his own offense off the dribble. He credits a lot of the successful transition to his previous basketball training at Core Academy.

“Athletically the transition has been fairly easy,” Juzang said.“I came from Core Academy and they more than prepared me for high school basketball. Still, being the best school year I’ve had, the training schedule was like no other and they taught me a very hard work ethic, so I was very ready for the next level. The coaches at Harvard-Westlake have helped me a lot as well.”

Coming to Harvard-Westlake pushed Juzang to work hard everywhere, and at every workout. Although Juzang still recognizes that he has work to do on the defensive end, he believes his athleticism and determination will lead him to success there soon. 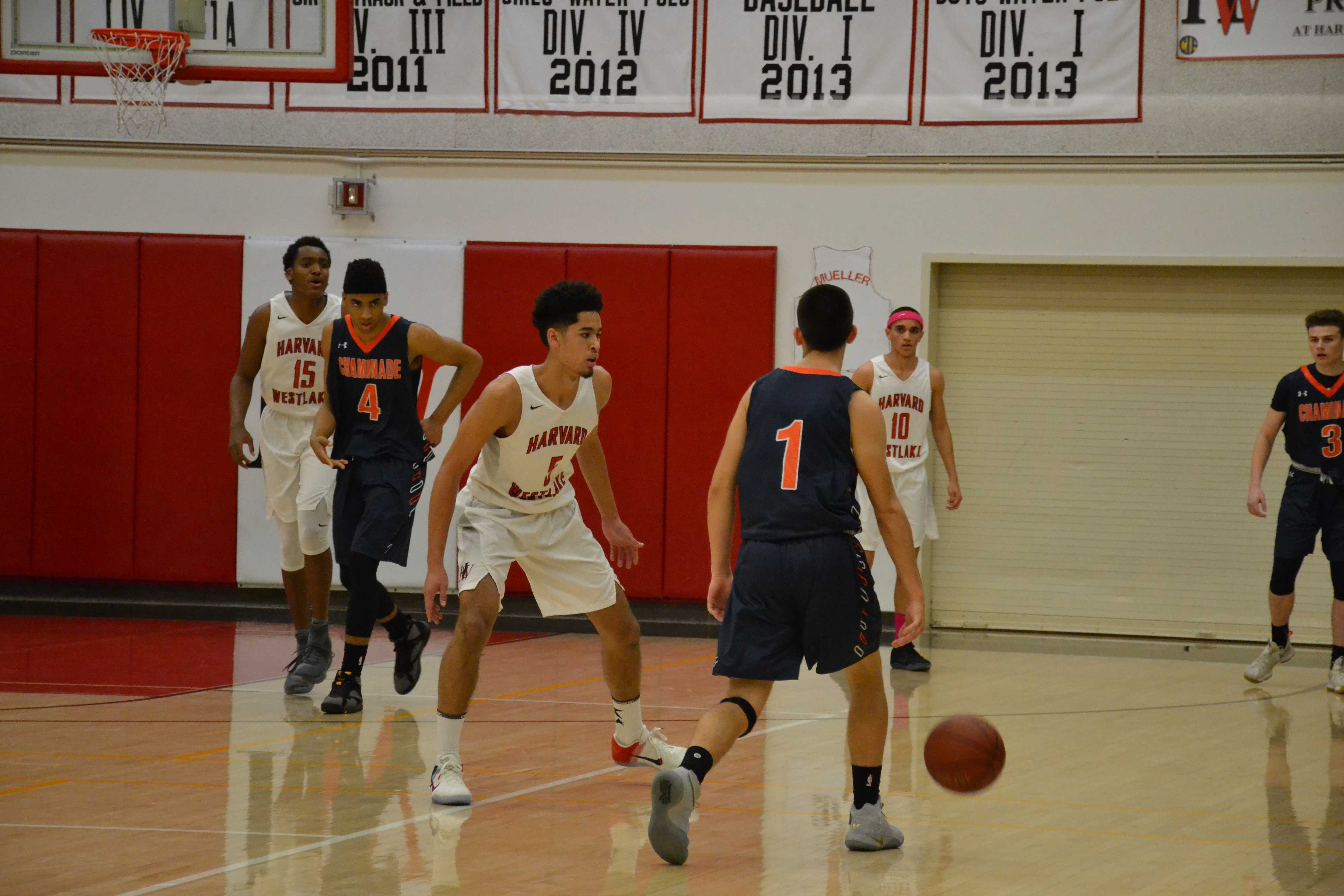 “I’ve changed my mindset and approach to the game, so that whenever I step on the court or into any kind of workout, I go as hard as I possibly can. I’d say that improved defense is a result of just going hard in general. It’s gotten better but I’ve got a lot to improve on. On-ball defense is a big focus right now.”

The perfect fit, as Juzang describes it, is something that has made his transition to high school basketball that much easier. Head coach David Rebibo coached Juzang’s older brother, Christian,and Juzang and his family have admired his coaching style ever since. Juzang chose to apply to Harvard-Westlake based on his familiarity with Rebibo, among a host of other factors.

“I was never recruited to Harvard-Westlake,” Juzang said. “My family has known Coach Rebibo for years because my older brother, Christian, played for him as a freshman and he’s always been a great coach. We choose the school because we thought the academic and athletic programs would be a good fit for me and my sister. The transition to the school has gone pretty well. There’s definitely no shortage of work but as long as you manage your time you’ll be fine.”

Just because Juzang is new to high school basketball doesn’t mean he is new to competing at high levels of the sport. As a point guard for the AAU team the Compton Magic, Juzang is no stranger to having the target be on his back; many times the Magic was ranked as the top club team in the country.

“It’s a phenomenal program with great people,” Juzang said. “We’re an Adidas program and play in the Adidas Gauntlet. We have so much fun and everybody can play. Over the spring and summer, we travelled all over the country and a little bit out of it to Canada. It was tons of fun and a great experience.”

One of the best ways to see how valuable Juzang is to the Wolverines is watching how the team does without him playing. Juzang was absent for the Wolverines’ narrow win over last-place Notre Dame and in a tournament loss to De La Salle because of a broken finger. It’s no coincidence that the lanky guard’s absence resulted in a season low in points, 47 and 41 respectively, and field goal percentage for the team at 22 percent. Although it’s a small sample size, the fact that the team scores almost 20 less points per game speaks to the importance of the attention, spacing, shooting and passing that Juzang brings to the table every night.

“Playing with Johnny has been very fun,” Iken said. “He’s very talented, so he gets a lot of attention. It just opens up the floor with his ability to shoot the ball. People don’t put as much help defense on the rest of us so you can go off screens, attack the basket from his side, and when he’s open you give him the ball. He’s most likely going to make the shot.”